This artwork won’t win any awards for typography or accessibility (I mean, purple writing over a dark picture!!) but the imagery is stark and hostile. In the way that EPMD’s Business as Usual album cover glorifies violence, it is almost cartoonish in comparison with the cover Scarface’s debut album.

I can’t quite pick the emotions on Scarface’s face as he peers through the drug buy-gone-bad. There is a hint of sadness beneath the aggression. He isn’t looking at the others, but straight into the camera, almost making you a part of this seedy Houston underworld – something he then proceeds to explain in detail over the 12 tracks on the album. I’m going to use the word visceral, not sure what it means, but it seems apt.

Allegedly the ‘coke’ in the picture was just flour, because as Scarface said himself, if it were coke, he would have stolen it and sold it on the streets. Thankfully, he went on to sell albums and had a huge impact on the ‘street thug’ rap of Tupac, Biggie, Jay-Z, etc. 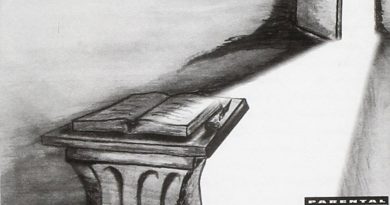